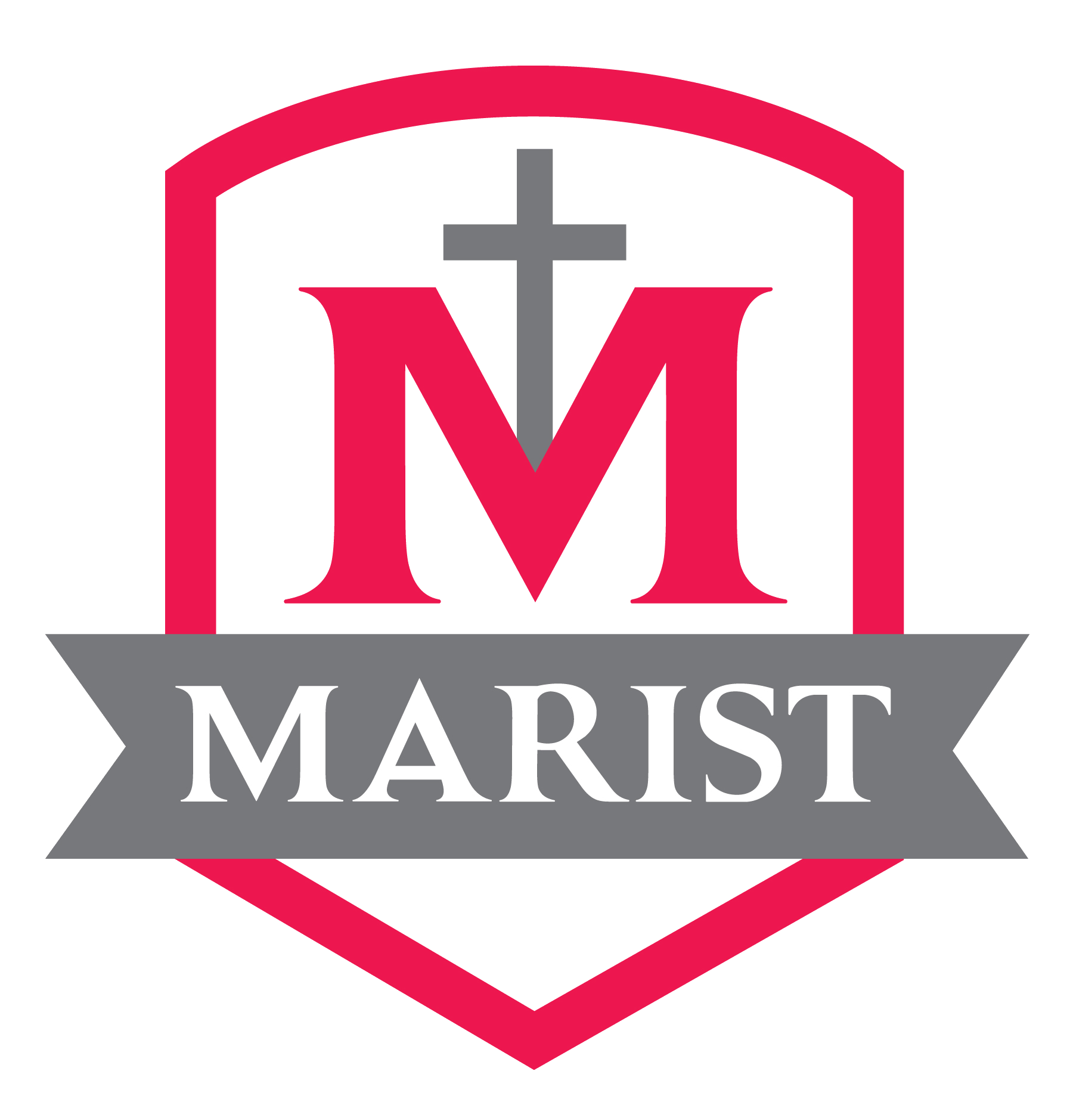 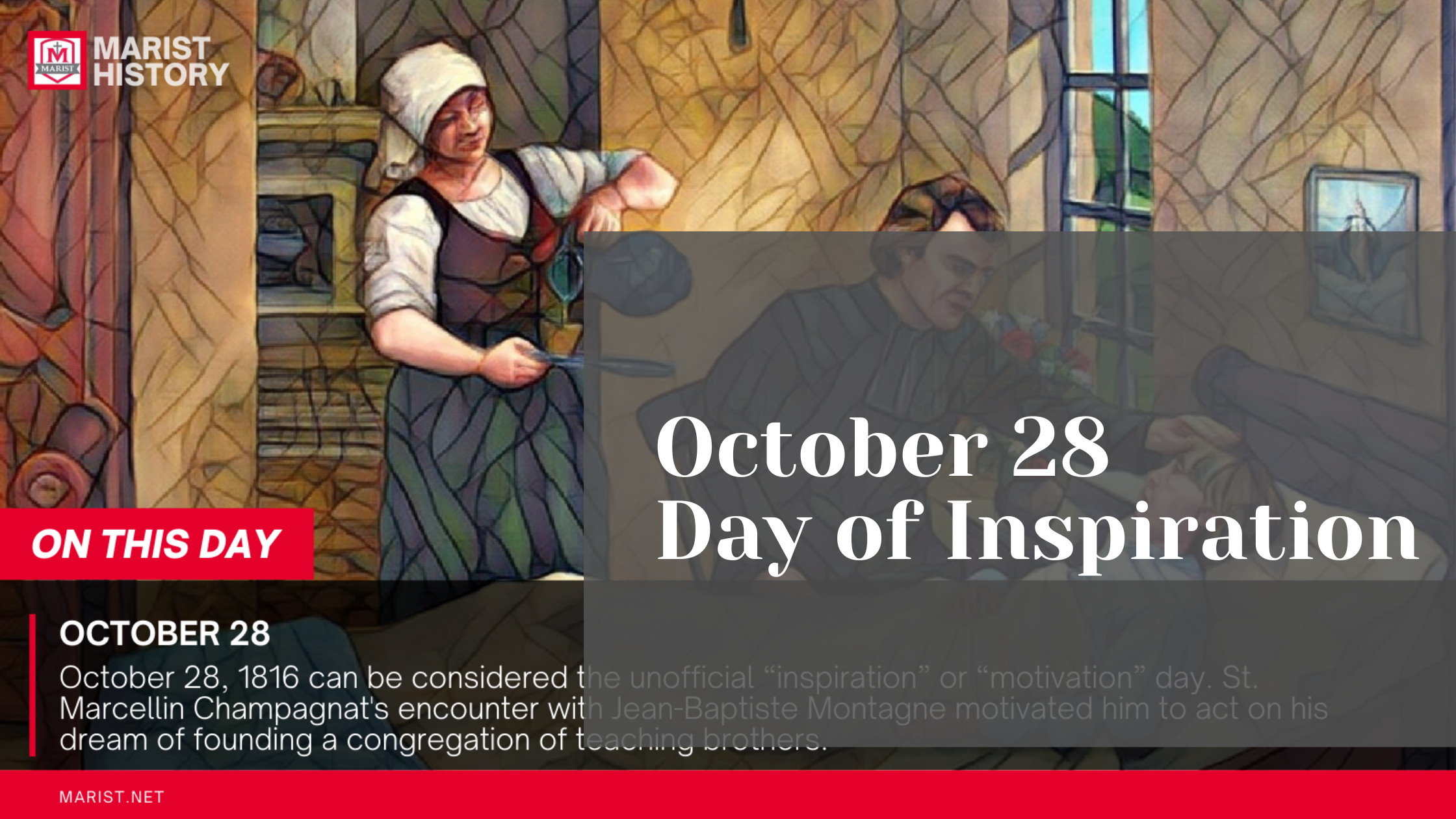 While January 2, 1817 may be considered the official foundation day of the Marist Brothers, October 28, 1816 can be considered the unofficial “inspiration” or “motivation” day. For those engaged in Marist mission past or present, this is more than an important date in history. The story of Jean- Baptiste Montagne is more than a historical footnote. It is a vivid reminder of why we do what we do and how we do what
we do. Marcellin’s visit to the Montagne household was somewhat extraordinary as is explained in these excerpts from Evangelizers in the Midst of Youth, the document on Marist Youth Ministry.

On arriving at La Valla, Marcellin Champagnat found that the town was suffering the logical consequences of the crisis that France was going through at that time. Primary schools, evident almost everywhere prior to 1789, had all practically disappeared, and the majority of the teachers of Marcellin’s day were described by at least one historian of that era as being “irreligious, drunkards, immoral and the dregs of the human race.” As a result, according to an official report, the young people were living “in the most profound ignorance and given to the most alarming dissipation.”

For Marcellin, the historical circumstances and social context of his time must have weighed heavily on his mind and heart the morning he walked to the bedside of a dying and forsaken youth, Jean-Baptiste Montagne (17 years old). 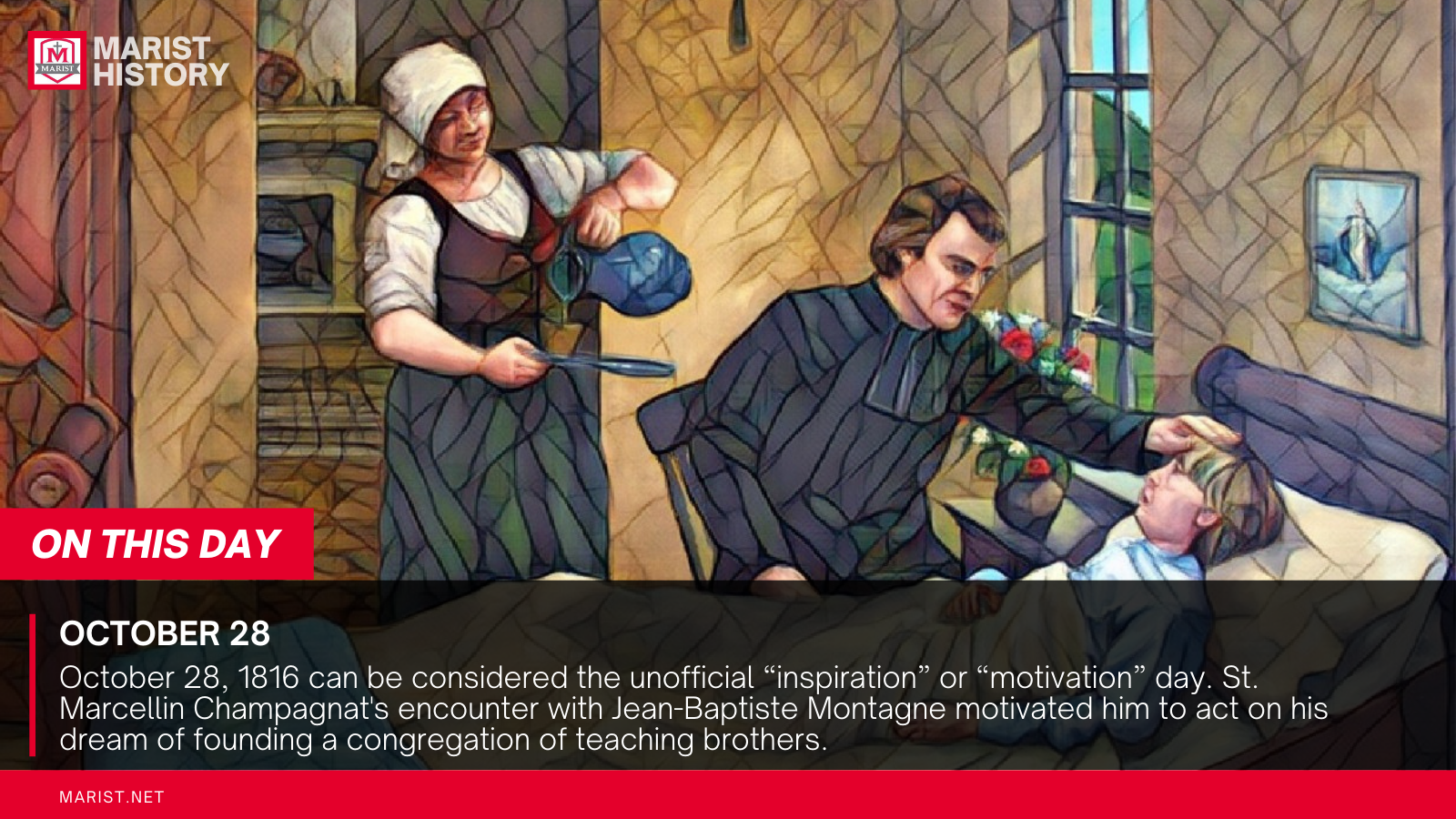 Church laws of the time held that confessors were expressly forbidden to give absolution to anyone who, among other things, did not know the fundamentals of the faith. The youth did not have the slightest idea of Catholic doctrine and consequently was deemed incapable of making a valid confession and receiving absolution. Marcellin sat down at his bedside and for two hours spoke with the youth about the existence of God and the essential truths needed to attain salvation. Even though the youth was extremely ill, he made a valiant effort to grasp everything being said. Marcellin believed he was ready to receive absolution and blessed him with it. We know the ending to this story and how this incident impacted Champagnat’s life and personality, confirming his intuition to found a congregation intent on educating children and young people.

Champagnat did not go to visit, he went to “meet” the young Montagne; he did not go to pass judgment or analyze a situation, but to meet “someone” who, like him, had a history, a truth, a reality. Champagnat did not look at the youth based on what others said or assumed about what to expect from a 17-year-old youth of that time. Both persons met at the point where each one was. Without denying his being an adult and a priest, Marcellin interpreted everything in terms of that meeting, not his own status. He put the youth’s needs first and foremost; laws were intended to serve people, not the other way around.

Marcellin would not have considered himself a radical, yet something moved him to go to the Montagne household despite the accepted parameters of who could and could not receive the sacrament of
reconciliation.  Marcellin’s encounter with Jean-Baptiste Montagne motivated him to act on his dream of founding a congregation of teaching brothers.

Marcellin was ordained on July 22, 1816. He met Jean-Baptiste Montagne on October 28, 1816, and he welcomed his first two recruits on January 2, 1817. Marcellin was a man of action. The fact that we are celebrating this day some 207 years after the official foundation day says that something grounded and sustained Marcellin in all his efforts. For those who know the story of Marcellin, it is clear that his spiritual focus of “all to Jesus through Mary” indicates that what he did was not about himself; it was about
“whatsoever you did to the least of these, you did to me.” That is why Marcellin’s legacy is still as needed today as it was in 1816.